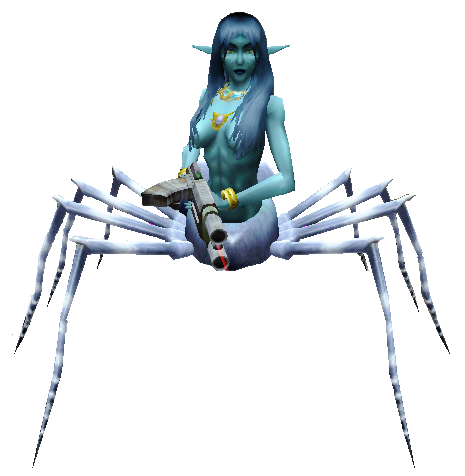 Arachna is a bio-mechanical arachnid hybrid - a cruel result of a brilliant but twisted scientific genius.

Arachna is a biologically engineered hybridized monstrosity; a catastrophic marriage of flesh and metal. She was created by a mad piercer, who wanted to take body modification to the next level. With the help of a mad scientist, he kidnapped a woman and took her to the scientist's lab. Unsuccessful attempts to get her humanoid form to bond with metallic structure have left her in a barely functional and permanent state of agonising pain. A cocktail of advanced drugs and a vivid memory of her engineered agony allow her to focus her efforts in the arena, where she takes great delight in projecting her own pain onto others.

Retrieved from "https://openarena.fandom.com/wiki/Arachna?oldid=5114"
Community content is available under CC-BY-SA unless otherwise noted.