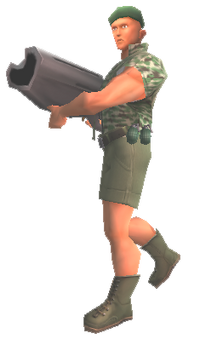 "Beret" is a easygoing ex-marine who was plucked from Iraq. Due to poor choice of suntanning location, he almost got hit by a stray RPG. Time seemed to freeze, Beret cacked his pants, and a voice offered him an avenue of escape. Confident he could handle it, and anything was better than death, he accepted, and vanished from earth. He is presumed dead, because everyone has assumed that he was vaporized by the RPG, leaving nothing but his chair behind. He continues to live, killing fellow competitors, and bemoaning the loss of his $5 sunglasses, which were not teleported with him. The other competitors give him crap about his beret, for which he has almost died on a number of occasions. Nobody knows his real name.

This guy is just cool.  He is made up of lens flares and doesn't afraid of anything (Even Illuminati).

His favorite diet is weed and dewitos.

He is not selectable in the menu because he is too MLG cool to be an obvious choice. "/model beret/cooldude" in command console makes the trick.

Retrieved from "https://openarena.fandom.com/wiki/Beret?oldid=16814"
Community content is available under CC-BY-SA unless otherwise noted.