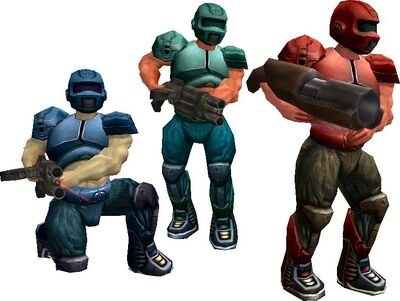 Grism is a male space marine. Grism is an acronym for "Generic Random Space Marine". The I stands for nothing.

Chris Holden created the model while creating a simple rough-characters-out-quick modeling tutorial. Later on leileilol exported the model to OA with animations and it is the first player model made for OpenArena with .blend source files.

In 0.7.0 Enki reskinned him and leileilol also redid the animations, also RottKing did his new voice.

Retrieved from "https://openarena.fandom.com/wiki/Grism?oldid=12835"
Community content is available under CC-BY-SA unless otherwise noted.