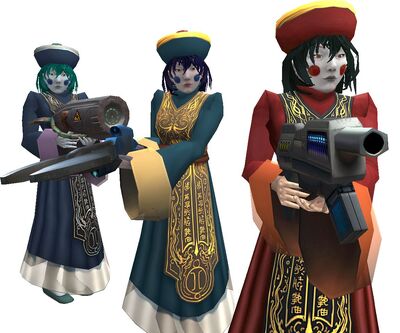 Kyonshi is a female Chinese jiang-shi; the jiang-shi are reanimated corpses that hop around, killing living creatures to absorb life essence from their victims. They are said to be created when a person's soul fails to leave the deceased's body due to improper death, suicide, or simply a desire to cause mischief. The arena provides an ideal environment for the jiang-shi where they can harvest victims for almost limitless sustenance.

Secret skin: in OpenArena 0.8.x, you can type /model kyonshi/beh in command console after entering a match, to temporarily use an hidden skin featuring a dark violet/gold color scheme. See also Cut Content#Models and skins.
Due to the lack of an icon for that skin, even a simple map change or vid_restart will cause the game to show you the default Sarge model instead (at that moment, you have to use "model" command to select another one, and then again to select kyonshi/beh back). Other people who joined the server (or performed vid_restart) after you selected the skin, will see you with the default Sarge model.

Retrieved from "https://openarena.fandom.com/wiki/Kyonshi?oldid=13594"
Community content is available under CC-BY-SA unless otherwise noted.