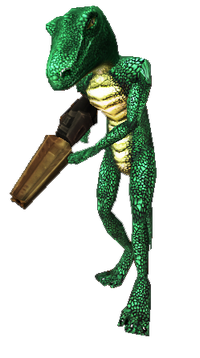 Currently only known as Liz, this creature is a member of an ancient race of dinosauroid humanoids. Original inhabitants of planet earth and direct descendant of the dinosaurs. After the cataclysm of Chicxulub, the few dinosaurs who survived mutated and evolved into a race of highly intellegent species of humanoid reptilians. Liz, then, a humanoid reptilian. as a member of the reptilian race, has vowed revenge against those who launched the meteorite of Chicxulub.

Retrieved from "https://openarena.fandom.com/wiki/Liz?oldid=3823"
Community content is available under CC-BY-SA unless otherwise noted.