You change your in-game model by clicking the bottom right corner of the player setup menu. (If you are using 0.6 version, there is an invisible button there)

Angelyss is the leader of a gang of berserker beauties. A hunter since her teenage years, Angelyss is not one to take lightly. She originated from the Land Behind The Seven Ridges, where she was hunting for a living. Once when she was trapped by a mutant tiger, a void opened up that took her into the Arena. She reasoned that a survival horror with unlimited lives is better than a one with a single life. With some experience in the Arena, she learnt that running practically naked is actually more effective in stopping bullets than thick armor, as her opponents are mainly males. She uses a shock-and-awe strategy to paralyze other opponents, and to deepen the effect she wears very scarce clothing, consisting only of a rope and some straw, with armblades and a winged helmet. She established a gang accepting any girls with decent looks to accompany her. (See Angelyss). 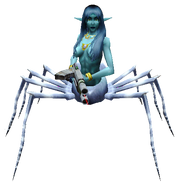 Arachna is a biologically engineered hybridized monstrosity; a catastrophic marriage of flesh and metal. She was created by a mad piercer, who wanted to take body modification to the next level. With the help of a mad scientist, he kidnapped a woman and took her to the scientist's lab. Unsuccessful attempts to get her humanoid form to bond with metallic structure have left her in a barely functional and permanent state of agonising pain. A cocktail of advanced drugs and a vivid memory of her engineered agony allow her to focus her efforts in the arena, where she takes great delight in projecting her own pain onto others.(See Arachna). 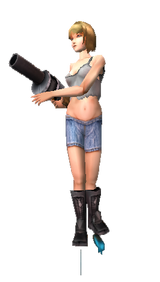 Once a poor girl living in the slums, Ayumi hit jackpot when she won the lottery. She was, however, pushed off a cruse ship by a disgruntled cousin. On her way to the bottom a voice gave Ayumi a choice, join the arena, or die. Figuring she had nothing to lose, Ayumi chose to join the arena. She is STILL looking for a way to get back at her cousin. (See Ayumi).

"Beret" is a easygoing ex-marine who was plucked from Iraq. Due to poor choice of suntanning location, he almost got hit by a stray RPG. Time seemed to freeze, Beret cacked his pants, and a voice offered him an avenue of escape. Confident he could handle it, and anything was better than death, he accepted, and vanished from earth. He is presumed dead, because everyone has assumed that he was vaporized by the RPG, leaving nothing but his chair behind. He continues to live, killing fellow competitors, and bemoaning the loss of his $5 sunglasses, which were not teleported with him. The other competitors give him crap about his beret, for which he has almost died on a mumber of occasions. Nobody knows his real name. (See Beret). 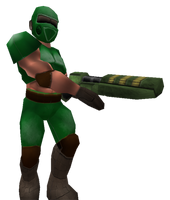 A man of few words and fewer mistakes, the unnamed space Marine has earned his place amongst the veterans of the Arena. While working as a guard for the notorious mega-corporation AGM, a lone Marine suddenly found himself in his very own hell. After fighting wave after wave of demons, his selection as an Arena combatant almost came as a blessing. Chosen originally for his masterful survival skills and threshold for pain, Grism has adapted well to the fast paced world that is the Arena, although he still maintains the wide-eyed grimace of a man dragged through the depths of the inferno. (See Grism). 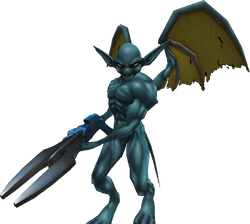 While statues of his diabolical visage adorn the towers of Notre Dame, villagers lived in blissful ignorance of his existence for hundreds of years. Known by many names, including Doccione, Ausguss, and the simple Gargoyle, he is an icon of fear, perversion, and deviance throughout the world. Now, taken from his seclusion into the rigorous trials of the Arena, he can no longer rely on fear alone. Fortunately, his quick reflexes and sadistic pleasures will do just fine.(See Gargoyle). 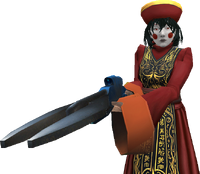 Kyonshi is a female Chinese jiang-shi, the jiang-shi are reanimated corpses that hop around, killing living creatures to absorb life essence from their victims. They are said to be created when a person's soul fails to leave the deceased's body, due to improper death, suicide, or just wanting to cause trouble. (See Kyonshi).

Currently only known as Liz, this creature is a member of an ancient race of dinosauroid humanoids. Original inhabitants of planet earth and direct descendant of the dinosaurs. After the cataclysm of Chicxulub, the few dinosaurs who survived mutated and evolved into a race of highly intellegent species of humanoid reptilians. Liz, then, a humanoid reptilian. as a member of the reptilian race, has vowed revenge against those who launched the meteorite of Chicxulub. (See Liz).

Major's real name has since long been forgotten in favour of her outstanding skills in combat and ruthless commandment of troops. She was made major in charge of the troops in a far away scientific outpost in the border of the observable universe. Extensive military training for even the most improbable worst case scenarios could not prepare her for what she was to experience at the research facility in Gamma Espilbergonis XF-443. Demons unbeknownst to her torment the little of humanity that still guided her merciful decisions. Demons from outer dimensions? Inner dimensions? Her mind may be the only enemy that exists, nevertheless, she feels the need to destroy everything her mind senses in order to attain a little of tranquility. (See Major)(secret breakdancing reference missing!)

An over-enthusiastic Linux user, was working at an office job when he discovered a program in his computer to create a portal to the Arena. He hasn't had sexual contact in years, look behind yourself often, 'cause penguins are sneaky. you hear a subtle waddling in the night, and think nothing of it. But you should be afraid. Sneaky. Nefarious. Penguins. (See Penguin).

Skelebot is a robot experiment that went horribly wrong. He woke up with an insatiable desire to KILL those around him. Skelebot was built by Bill Gates as a creation that would end all open source programs forever. Bill made a fatal error when he tried to use windows vista to program the robot. Before they could save their program Vista got too bloated with bloatware. Instead of killing open source he was now programed to kill everything he can .Skelebot found a loving caring home in the arena where he can kill as much as he likes. (See Skelebot).

Tony was a double agent on the streets of Chicago. To criminals, he was known as a ruthless hitman; to the rest of the world, he was the prime detective on the force. One day while looking for his next big break in the case, he fell into the mob leader's trap and was severely wounded. Believing this was the end for him, Tony nearly gave in to death. A mysterious voice came from nowhere, asking him if he wanted to live. Not knowing where else to go, Tony answered yes, and he was sucked into Battle in a far distant land. (See Tony).