The map has a central dome acting as the main arena. This octagon contains a death pit, with a small wood bridge with a Quad Damage in the middle. This wood bridge is wide enough to allow players to walk over it, yet it's so narrow that the slight push by way of a hit or splash damage is enough to throw players to the pit. There's a set of pillars which act as both cover and lighting provider. There's also an upper floor, sustained by these pillars. 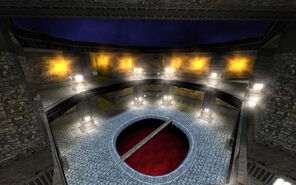 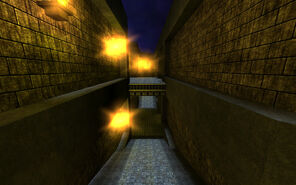 Retrieved from "https://openarena.fandom.com/wiki/Maps/am_galmevish2?oldid=20141"
Community content is available under CC-BY-SA unless otherwise noted.