Reasons for the page to be improved:
Add Domination points; add weapon/item locations.

A castle composed of several areas, mostly 1-floored ones.

Let's start with the Central Yard. It's a big area holding some bushes, some pillars, and the Lightning Gun. It connects almost every other room/section of the map. At the north of this area there's an upper balcony holding the Rocket Launcher.

At the very west of the map, we have the Pit area. Like it's name says, it's composed by a deathpit. Hovering over it, there's a Megahealth. This area has also some ramps, one of which holds a Grenade Launcher. It connects the South Room, the Railgun-Pit passage and the Central Yard. The lower corner which connects this area with the Central Yard is the spawning area for the Red team in Elimination matches.

The South Room is located at the South of the map. It's a room with some structures acting as cover, and which holds some armor shards and the Plasma Gun. Next to it is a smaller room connecting it with the Entrance area.

The Entrance area has several balconies, some of them holding important items such as weapons or the Body Armor. It connects the South Room with the Dining Room. In Elimination matches, the Blue team starts in this area.

The Dining Room has a big table holding a Quad Damage, and a library. There's a walkway connecting both upper entrances. It's the only room which holds no weapon.

There're other areas of interest, such as a small cross-shaped room which holds the Railgun, and whose instant exit gives a good sniping point. 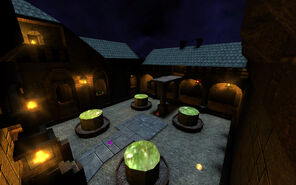 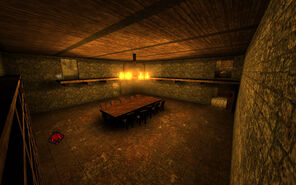 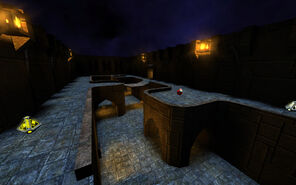 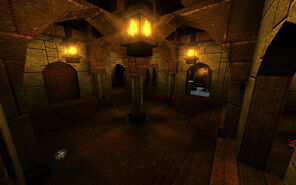 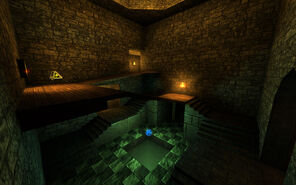 Retrieved from "https://openarena.fandom.com/wiki/Maps/czest1dm?oldid=20163"
Community content is available under CC-BY-SA unless otherwise noted.