Reasons for the page to be improved:
Add Weapons and Items; add Domination points

The map features two big main rooms, separated by a big wall, alongside three mid-sized chambers. Each one of these has several features. It also has very high ceilings.

The North room has a big, open area, with next to no cover, and a Railgun is available at the northest spot in the map. There's also a balcony with some Armor shards. There're four jumppads: three at the West, North and East balconies, connecting them with the lower floor, with the North one connecting the floor with the Railgun spot, and another one, connecting the East balcony with the East upper entrance. The lower floor has two passages which connect the North room with the South room. The Railgun area has a teleporter behind it. It ends in a small Rocket Launcher chamber in the South room.

The South room has connections with three mid-sized chambers: one at the East, holding the Plasma Gun, other at the West, which holds the Lightning Gun, and the South one, holding the Body Armor.

The East chamber holds the Plasma Gun, and connects a small chamber holding a Teleporter and a Combat Armor with the South chamber, by way of two passages. These two passages are also connected between each other at the middle point. The lower passage features a small room in the middle point which holds a Grenade Launcher, a small balcony with some health items, and a ramp connecting it with the East chamber.

The West chamber features the aforementioned Lightning Gun, a Teleporter ending in the Grenade Launcher chamber, and a big tower. This big tower holds some ammo and a Regeneration at it's highest spot, but it can only be reached by way of a Rocket jump. Two passages connect it with the South chamber. The lowest of them has a small chamber with some ammo and a Shotgun.

The South chamber features an horizontal Jumppad with no clear destination, so the player must force where this jumppad ends. In the upper level, there's a Red Armor, and a Teleporter in front of it. It's destination is the lower chamber between the North and South big rooms. 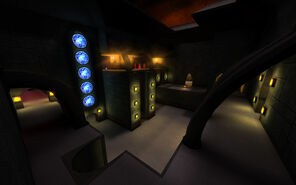 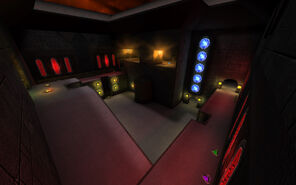 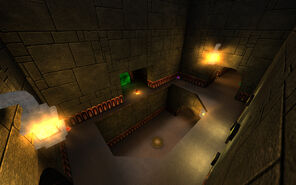 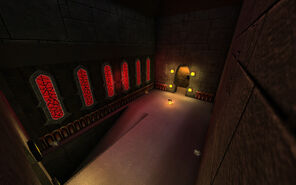 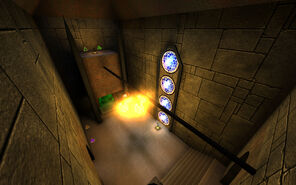 Retrieved from "https://openarena.fandom.com/wiki/Maps/mlca1?oldid=20187"
Community content is available under CC-BY-SA unless otherwise noted.