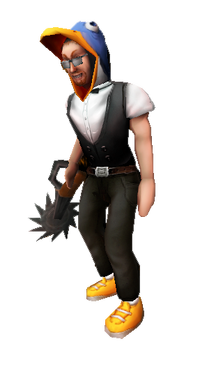 Penguin A light parody of Linux users who love Tux way too much by a Linux user who's tired of seeing Tux in almost every open source game.

Garret Tuxtson Johnson Linsuz was born 2450 in Nerdville. Before coming to the open arena battles he was an entertainer in a circus and featured (alarmingly) as a paint drinking penguin. Since losing his job he became so enraged that he now wears his penguin costume in the arena and simply hails by the name "Penguin".

Incidentally, his high pitched voice is due to his tightly fitting underpants.

Retrieved from "https://openarena.fandom.com/wiki/Penguin?oldid=12571"
Community content is available under CC-BY-SA unless otherwise noted.