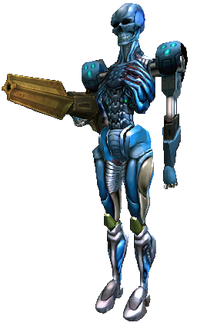 Skelebot is a cyborg robot experiment that went horribly wrong. After activation, it developed a pathalogical desire to kill those around him. Upon further research the designers found most of the 'donated' tissue came from the serial killer of 2007, Stacy Castor.

Skelebot is a robot experiment that went horribly wrong. He woke up with an insatiable desire to KILL those around him. Skelebot was built by Bill Gates as a creation that would end all open source programs forever. Bill made a fatal error when he tried to use windows vista to program the robot. Before they could save their program Vista got too bloated with bloatware. Instead of killing open source he was now programed to kill everything he can. Skelebot found a loving caring home in the arena where he can kill as much as he likes.